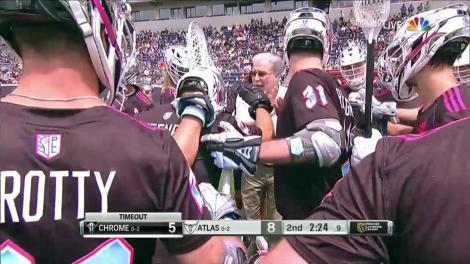 Coach Dom Starsia fires up his men during a Chrome huddle.

Slick field conditions brought about by a late spring sprinkling of rain could not slow down the pulse-pounding, relentless action as week 3 of the Premier Lacrosse League kicked off in its third city, Chicago, Illinois.

This week, Seat Geek Stadium played host to all of the hits and heart-stopping plays that are quickly becoming the signature content of the brand new PLL.

Fans were treated to another nail-biter as the Chaos and Redwoods lacrosse clubs traded punches all the way to another overtime classic, before Chaos attackman Josh Byrne tiptoed the crease and buried his second goal of the day, giving Coach Andy Towers consecutive wins in the league’s young season.

Jordan Wolf launches a shot toward the Atlas goal as defender Ryan Conrad (#22) seeks to stop him from scoring.

Aside from slugging it out on the scoreboard, the two teams traded punches during the third quarter in an on-the-field brawl. The fisticuffs earned three Chaos players a spot in the penalty box and added to the hard-nosed reputation of the fledgling league.

Although only 90 miles away from South Bend and essentially a “home game” for the several “Golden Domers” on the Redwoods roster, Notre Dame alums found themselves outshined by couple of U Albany products, as Conor Fields and Miles Thompson combined for 8 points in the winning effort for team Chaos.

Although the rain subsided and the Father’s Day crowd was treated to sunny skies on Sunday, the action continued to pour down as the Atlas squared off against the Chrome lacrosse club.

In a contest featuring the last 2 winless teams in the league, the momentum swings, hotly contested possessions and nebulous talent of the PLL was on full display. Pitching a “shutout” in the second quarter, the Atlas fell victim to a 5-0 run in the third, sparked by Matt Danowski, whose two-point bullet blistered the goal for his first tally of the season. In a game that saw four separate ties, a late-game Atlas rally highlighted by four goals from Connor Buczek sealed the first victory for the Atlas squad and sent the Chrome to a 0-3 record moving into week 4 of the PLL’s inaugural season.

Be sure to tune in next week as the action heats up with another Saturday double header. The full PLL schedule is here, and all games can be watched on NBC Gold.